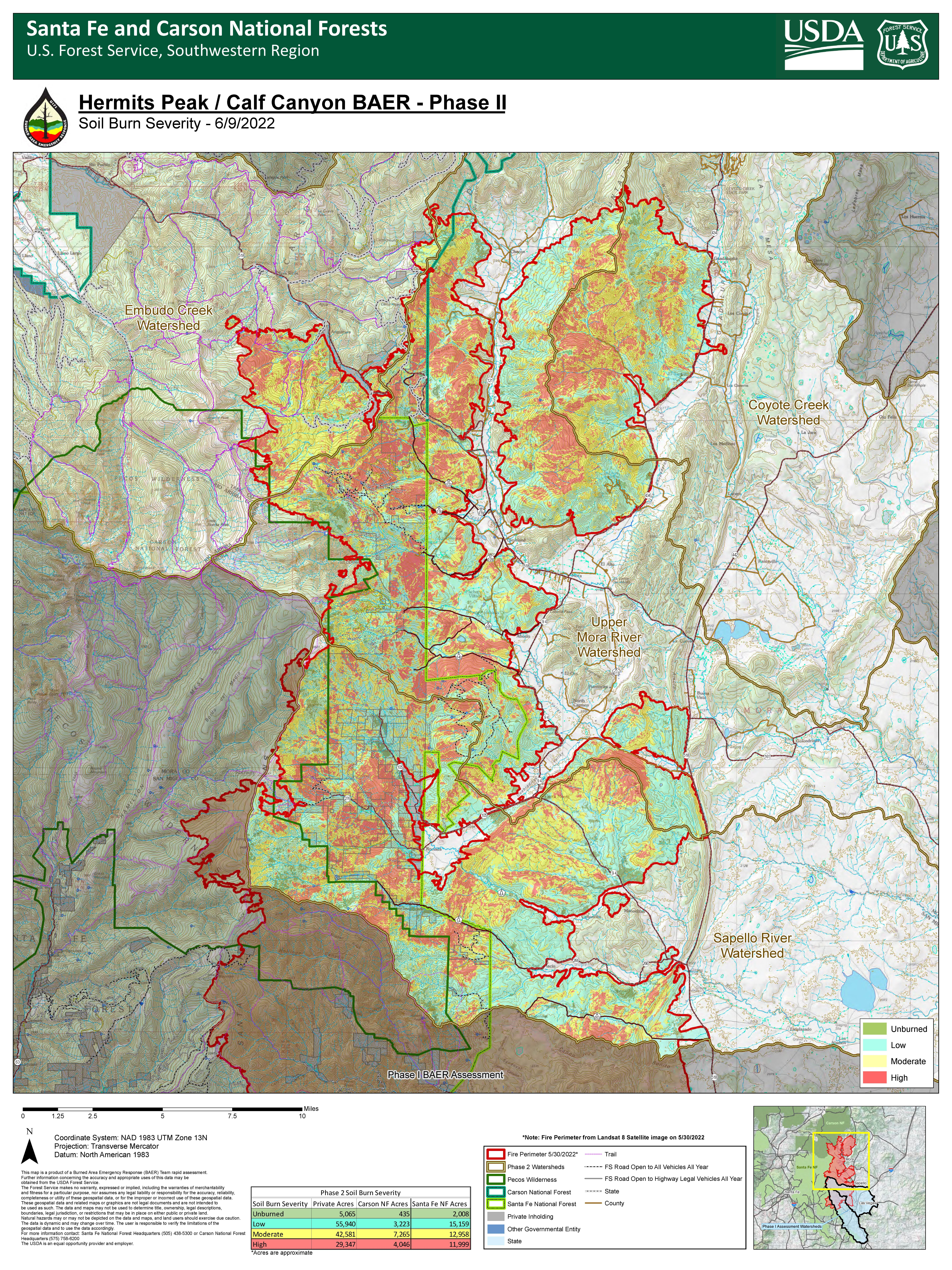 Approximately 43% of the Phase 2 acres are either unburned/very low or low SBS, while 33% are moderate SBS and 24% are high SBS. Areas within the watersheds that were assessed continue to burn, and the potential for reburn exists in areas with unburned, very low and low SBS.

The Phase 2 SBS map also shows the acreage for land ownership for the 190,026 acres in the Phase 2 assessment:

The BAER assessment team used preliminary remote sensing data based on satellite imagery from May 30, 2022, with field-validated data collected over several days to produce the Phase 2 SBS map. Field-validated data was only collected on National Forest System (NFS) lands. This information was then used to extrapolate SBS off NFS lands.

The BAER team and the US Geological Survey (USGS) use the SBS map as a tool to estimate post-fire erosion, including the potential for subsequent sediment delivery, stream flows and debris flow.

The SBS map product is an estimate of fire effects on soils and not a measure of direct effects to vegetation. SBS characterizes the soil surface and below-ground impact, whereas effects on vegetation are estimates of mortality based primarily on changes in vegetation canopy. The Rapid Assessment of Vegetation Condition after Wildfire (RAVG) program produces data describing post-fire vegetation conditions on NFS lands. Changes in overhead and understory vegetation canopy are often used as initial indicators of overall burn severity, but do not necessarily coincide with SBS.

Changes in soil cover, water repellency, and soil physical/biological conditions guide the interpretations to determine the severity burn level of the soil. Water repellency can occur naturally in soil and may change as a function of fire. Fire can increase the strength and thickness (or depth) of water-repellent layers in soil, considerably affecting post-fire water runoff and possibly extending time for recovery of the burned area.

Low SBS generally occurs where surface organic layers are not completely consumed and are still recognizable. Structural aggregate stability is not changed from its unburned condition, and roots are generally unchanged because the heat pulse below the soil surface was not great enough to consume or char any underlying organics. The ground surface, including any exposed mineral soil, may appear brown or black (lightly charred), and the canopy and understory vegetation will likely appear “green.” Lower risk for accelerated runoff, erosion, flooding and debris flows is expected within and below these areas compared to moderate and high SBS.

In areas with moderate SBS, up to 80% of the pre-fire ground cover (litter and ground fuels) is consumed. Fine roots may be scorched but are rarely completely consumed over much of the area. The color of the ash on the surface is generally blackened with possible gray patches. There may be potential for recruitment of effective ground cover from scorched needles or leaves remaining in the canopy that will soon fall to the ground. The prevailing color of the site is often “brown” due to canopy needle and other vegetation scorch. Soil structure is generally unchanged. Where greater amounts of reduced soil cover and increased water repellency occur, increased overland flow of water from precipitation is expected, most notably in locations where the overstory canopy no longer exists.

High SBS occurs where all or nearly all the pre-fire ground cover and surface organic matter (litter, duff, and fine roots) are consumed, and charring may be visible on larger roots. The prevailing color of the site is often “black” due to extensive charring. Bare soil or ash is exposed and susceptible to erosion, and aggregate structure may be less stable. White or gray ash (up to several centimeters in depth) indicates that considerable ground cover or fuels were consumed. Sometimes very large tree roots are entirely burned extending from a charred stump hole. Soil is often gray, orange, or reddish at the ground surface where large fuels were concentrated and consumed.

Generally, there is 100% tree mortality in high SBS, and tree recovery will take many years without planting. In high SBS, the exposed bare soil is very prone to post-fire impacts. Rain events on damaged soil can cause excessive soil erosion, resulting in higher volumes of sediment delivery to adjacent creeks and rivers. There is increased likelihood for flooding and debris flows. These threats can individually or cumulatively increase the risk to human life and safety, property, infrastructure, and important critical natural and cultural resources.

BAER SAFETY MESSAGE: Everyone near and downstream from the burned areas should remain alert and stay updated on weather conditions that may result in rain and increased water runoff. Flash flooding may occur quickly during rain events. Be prepared to act. Current weather and emergency notifications can be found at the National Weather Service website:  www.weather.gov/abq/.

Have A Question? Call Us Toll Free