SANTA FE, NM – July 5, 2022 – A new closure order that goes into effect today at 8 a.m. reopens some areas on the west side of the Pecos/Las Vegas Ranger District that were closed under an earlier order, which terminates today, that restricted access to the entire district due to extreme fire danger. Monsoonal precipitation and additional containment of the Hermits Peak and Calf Canyon Fires have reduced the risk and allowed the Pecos/Las Vegas Ranger District to scale back the restricted area.

The always-popular Pecos Canyon corridor remains closed to hiking and camping under the new order, including all recreation sites from the Dalton Picnic Site north to Jacks Creek Campground, and there is no picnic or trailhead access within the canyon.  Access to the Gallinas Canyon corridor is also off-limits.

Please do not plan to visit the following recreation sites:

The Hermits Peak and Calf Canyon flood risk closure protects public health and safety during wildfire suppression repair operations. Suppression repair includes hazard tree felling, road repair and stabilization, heavy equipment use and fire rehabilitation activities. The order also protects public health and safety in the event of potential post-fire impacts, including debris flow and flash flooding. The order will be in effect until it is rescinded or until Dec. 31, 2022, whichever comes earlier.

Federal, state and local officers, firefighters and members of an organized rescue team, and any others authorized by Forest Service permit are exempt from the closure order. Violation of the closure order is a Class B misdemeanor punishable by a fine of not more than $5,000 for individuals and $10,000 for organizations, imprisonment of not more than six months, or both.

The closure order and map are posted on the SFNF website, and copies are available at SFNF headquarters
and the Pecos and Las Vegas Ranger Stations. For additional information, please contact the Pecos office at 505-757-6121 or the Las Vegas office at 505-425-3534. All current closure orders are posted on the Alerts and Notices page of the website. 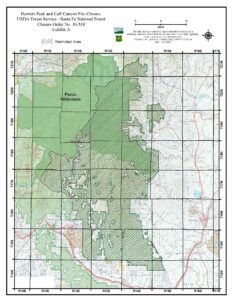 Have A Question? Call Us Toll Free